BEDFORD, Pa. – Total solar eclipses don’t happen every day. The last time such an eclipse was visible across the entire contiguous United States was on June 8, 1918.

Colonial Courtyard at Bedford will note this latest total solar eclipse on Aug. 21 in grand fashion with a “Black Out Party” at 1:30 p.m. in the senior living community at 220 Donahue Manor Road. 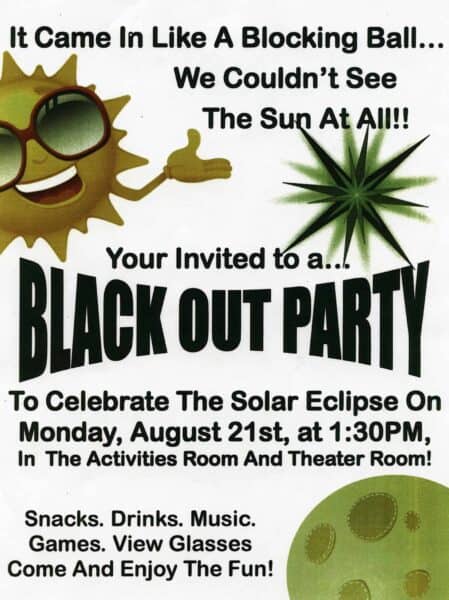 “The total solar eclipse is a rare and historic event and we want to make it both educational and enjoyable for our residents and team members,” said Nanette Bankes, Activities Coordinator at Colonial Courtyard at Bedford. “We have a full line of fun-themed events and games planned.”

“The Great American Total Solar Eclipse” will darken skies from the West Coast to the East Coast of the United States along a stretch of land about 70 miles wide.

“Our ‘Total Eclipse of the Sun/Black Out Party’ will include a number of stations that our residents and staff may visit to enjoy and educate themselves on this fun event,” Bankes said. “We will have solar eclipse viewing glasses. At one of our stations, we’ll play ‘Moon Ball,’ which is like volleyball with a balloon-style white punching ball that will resemble the moon.

“Another station will be in the Theater Room with a live streaming from NASA during this time of the Solar Eclipse of the Sun,” she continued. “Our country kitchen station will host a variety of fun foods such as moon pies, cheese balls, sun chips and Sunny-Delight punch.”

Colonial Courtyard at Bedford will have a photo booth to snap portraits of residents with a darkened universe background. A glow in the dark ring toss game also will be played.

The event will feature music with songs whose titles play into the theme such as “Here Comes the Sun,” “Moon Over Miami,” and “You Are My Sunshine.”

“Our residents are really looking forward to the total solar eclipse,” Bankes said.