CHAMBERSBURG, Pa. — Lavonda Patterson typically wouldn’t be at Magnolias of Chambersburg on a Wednesday afternoon. But the medical technician made a point to join her co-workers at the senior living community on Jan. 30.

The afternoon visit certainly paid off for Patterson, who works the third shift from 10 p.m. to 6:30 a.m. at Magnolias of Chambersburg. Her name was drawn from more than 35,000 entries of certified perfect attendance during 2018 payroll periods to win a new car as part of IntegraCare’s annual Continued Attendance Rewards (CAR) Program contest.

In its fourth year, IntegraCare’s CAR Program has evolved into one of the most anticipated events of the year for employees in 10 senior living communities located in Pennsylvania and Maryland. Pittsburgh-based IntegraCare has given away 11 new cars to employees since 2016.

“Whenever we found out the winner was in our building, a lot of us managers were in tears,” said Tressia Day, Executive Director at Magnolias of Chambersburg. “We were super excited for our team. When Lavonda won, you could see the excitement and hear it in everyone’s voice as they cheered.

“Lavonda has had perfect attendance and has not called off from work the last two years. She never comes in late. To top it off, she works the third shift, the hardest shift, and has been here all this time.”

Patterson has been part of the team at the senior living community since 1998, even before IntegraCare took over management at Magnolias of Chambersburg. In her role as a medical technician, she helps administer medications to the residents and provides resident care. She reviews medical carts and does breakfast prep and follow-up orders among her many duties.

“Getting to be with the residents is the best part of my job,” Patterson said. “I get to meet a lot of beautiful people.”

Recently, her husband’s car had mechanical issues, and the family had to adapt. Winning a new car should resolve those challenges.

“We were down to just one vehicle because my husband had a mishap with his and his wasn’t working,” Patterson said. “It came down to my car. He would use it during the day when he needed it. My mother-in-law lives with us so if he wanted to use my car, I would use hers. So, this came at a perfect time.”

The CAR Program awards a new car to a dedicated IntegraCare employee based on consistent attendance throughout the previous year. Additionally, three grand prize winners were named at each of the 10 communities. 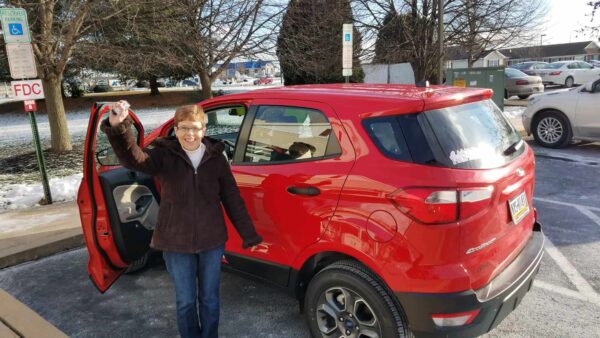 Prior to the Facebook Live announcement, IntegraCare employees were unaware of which community would be home to the new car winner. Facebook Live followed two IntegraCare administrators driving to the yet-unknown senior living community. Finally, when they arrived at the winner’s community, the camera revealed the location and the announcement was made inside.

“The CAR Program has generated excitement, boosted morale and helped improve attendance and retention of employees throughout our communities,” said Eric Walker, IntegraCare Executive Director of Sales and Marketing. “This innovative concept was introduced in 2015 and our first winners were announced in January of 2016. Since then, the CAR Program announcement has become a huge event our employees look forward to and watch unfold through the live video on Facebook. We’ve given away 11 new cars to our team members in four years and this has really changed lives.”

The CAR Program has had an impact on multiple fronts:

In addition to the new car, employees in the CAR Program at each community are eligible to win three grand prizes:

Those IntegraCare senior living communities participating in the contest are:

“IntegraCare is a great company to work for. They appreciate you,” Patterson said. “I’ve been here a long time. I’ve never missed any time. They reward you. I’ve worked at different places and I’ve never had that. It’s a great company.”