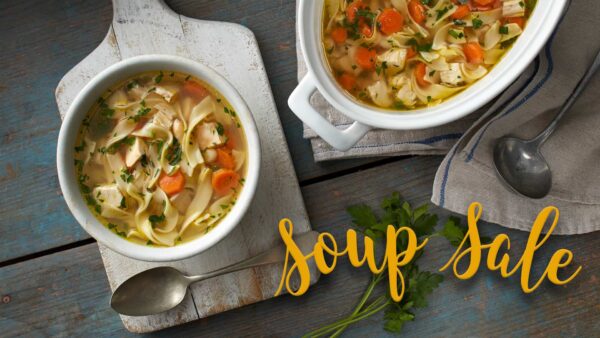 The soup sale will be held on Tuesday, Oct. 16. The selections are chicken noodle and ham and bean soups, each served with rolls for a donation of $7 a quart. Reservations may be made by calling 624-0100.  Soup delivery and pick up will be from 3 to 5 p.m. on Oct. 16.

“This is our third year of making soup and we hold two soup sales each year,” said Bobbi Howsare, Colonial Courtyard at Bedford Director of Sales and Marketing. “The soup sale in the spring benefits the Alzheimer’s Association. The one in the fall will benefit the Bedford County Humane Society in honor of our community puppy. Hope is such a wonderful addition to our community, and we want to give back to those that gave us our Hope.”

“Brandy is a great cook, and she normally never tells us her secret ingredients,” Howsare joked.

“We have huge success with this sale, due to us delivering the soup upon request,” Howsare said. “We open up the sales to all the local doctor’s offices, as well as local companies in the area. We will actually deliver to their business so they don’t have to wait. We deliver to their door.”

The soup is provided in a freezable container which makes it convenient to put in a freezer to be served at a later date.

For more information, contact Bobbi Howsare, Director of Sales and Marketing, Colonial Courtyard at Bedford, at bhowsare@integracare.com or 814.624.0100.