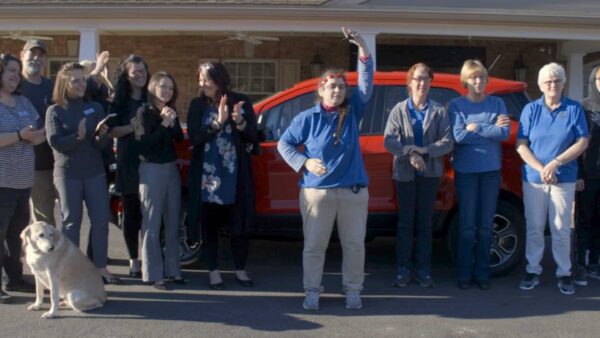 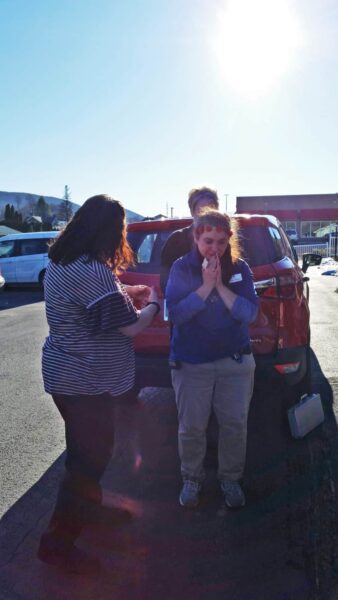 TYRONE, Pa. – Angela Whited was with a resident in the LifeStories area of Colonial Courtyard at Tyrone when she was summoned to the entrance of the building on East Pleasant Valley Boulevard on Wednesday afternoon.

Whited, a Resident Services Associate who has worked at the IntegraCare-operated senior living community since 2015, wasn’t sure what to expect.

As the doors opened, she saw a crowd of cheering coworkers outside. A shiny red Ford EcoSport was parked nearby.

Shannon Joyce, IntegraCare Director of Compensation and Risk Management, and Mindy Carrier, Director of Employee Benefits and Retention Programs, handed a set of keys to Whited, who was awarded the grand prize of IntegraCare’s Continued Attendance Reward (CAR) Program based on perfect attendance in 2019.

In the first year of the contest in 2015, IntegraCare gave away eight cars – one in each of eight communities participating in the contest with the winner announced in January 2016. Now, IntegraCare annually rewards one winner with a new car.

Each of the 10 communities also produces three grand prize winners of items such as a big-screen television, a tablet, one-year Netflix subscription, Amazon Prime membership, vacation time or a Fitbit Versa 2 watch.

Last year, Lavonda Patterson, a medical technician who works the third shift at Magnolias of Chambersburg in Pennsylvania had her name drawn from more than 35,000 entries of certified perfect attendance during the 2018 payroll periods. She won a Ford Eco Sport.

Those IntegraCare senior living communities participating in the contest are: