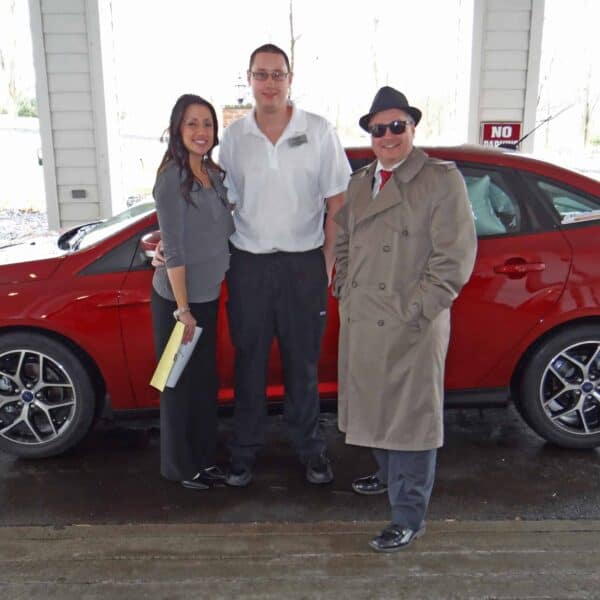 GREENSBURG, Pa. – Feb. 2, 2017 – Ryan Hershey hasn’t missed a day of work in his job as a dishwasher at Newhaven Court at Lindwood, a senior living community in Westmoreland County.

Thanks to his perfect attendance, Hershey, 27, will be driving a new Ford Focus to work in the Food Services Department at Newhaven Court at Lindwood.

Hershey was the lucky winner of IntegraCare’s second Continued Attendance Rewards (CAR) Program. His name was selected from among 453 eligible employees who earned 23,410 raffle tickets based on their perfect attendance at nine IntegraCare senior living communities in Pennsylvania and Maryland.

“I am humbled, glad, and just really surprised,” Hershey said following Tuesday’s announcement, which was made on IntegraCare’s Facebook page.

“We couldn’t be more proud of Ryan,” said Lori Grant, Executive Director of Newhaven Court at Lindwood. “Over the past eight years Ryan has been at Lindwood, he has never called off or has never been late for work.

“He demonstrates an excellent work ethic and is a great role model for others when it comes to his attendance and dependability,” Grant said. “Ryan is very deserving of such an amazing award.  He has been receiving high-fives and a pat-on-the-back from everyone in the community – even the residents and resident families who watched the live stream on Facebook.”

In addition to the new car, employees in the CAR Program at each community were eligible to win three grand prizes. All nine communities gave away:

·         First prize, a 55-inch television, one year subscription to Netflix, and one week of paid vacation.

·         Second prize, a laptop computer and printer, Microsoft Office, and one week of paid vacation.

“We respect our employees and consider each one a key member of our team,” said Richard Irwin, co-founder and CEO of IntegraCare. “In turn, they improve the quality of life for residents and their families. We ask our residents and their family members to encourage our team and help make our communities better places to work, which in turn makes it a better place to live. What better way for us to set an example than to provide an incentive contest in which our team members have a chance to win a new car?”

“The C.A.R. program gives all team members something to look forward to,” Grant said. “It is an amazing program that recognizes those who demonstrate solid attendance each pay period and throughout the year. Being able to depend on your co-workers is vital to any operation.”

In 2015, the CAR Program had a significant role in improving attendance and creating excitement as IntegraCare gave away eight cars and other grand prizes in early 2016 – one car at each community participating in that year’s contest.

“The CAR Program enabled us to put an impactful spotlight on our many dedicated team members who work so hard to improve the lives of our residents,” said Putzier, IntegraCare co-founder and president. “The incentive program made an ‘everyday’ routine such as coming to work just a bit more exciting. The program generated interest and a buzz.”