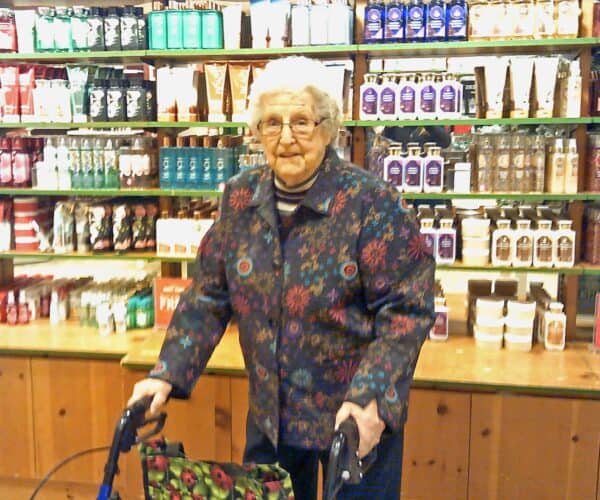 Vivian was born on September 25, 1923 in nearby Altoona. When her mother went into labor, her father, Bill, went to get the doctor, but Vivian was in a hurry to come into this world and was born at home before the doctor even made it there! Vivian had one brother, Author, of whom she was very close to as a child.

Growing up, Vivian’s family didn’t have a car. Her mother was a homemaker and when they needed to go somewhere, they rode the street car rails. In that day, the cost was seven cents per person one way. Luckily, her father only had to walk across the street to his job as a fireman on the railroad.

One of her favorite past times was spending time with the children on her “block” roller skating up and down the side walk. Vivian said she did try riding bike only once when she was young. Somehow she broke it when she got on and never wanted to ride again! Vivian is still in touch with one of the girls she grew up with, Lena. She said they still exchange Christmas cards each year.

After high school, Vivian attended business school, where she met Jack at a baseball picnic. It was love at first sight! At that time, he was a mailman, so she got to see him every day. Upon graduating school, Vivian, accepted a job at a street car company counting money tickets, but only until she and Jack married.

Once they were married, Vivian and Jack moved to Clearfield County and had four children, 3 boys and 1girl. They were blessed with 49 years of marriage. She said when recalling favorite past times with her husband, she couldn’t really recall just one. She said that it didn’t really matter what they did, they just loved spending time together. When I asked Vivian what where some of her fondest memories of her children when they were growing up, she said that just being able to stay home and be there for them is something she will always cherish.

Vivian has been a resident here for almost a year and looks forward to attending church, going to bible study classes, socials, and most recently she attended a shopping trip with us to Dubois Mall. She also enjoys spending time with the other residents and getting to know them better.