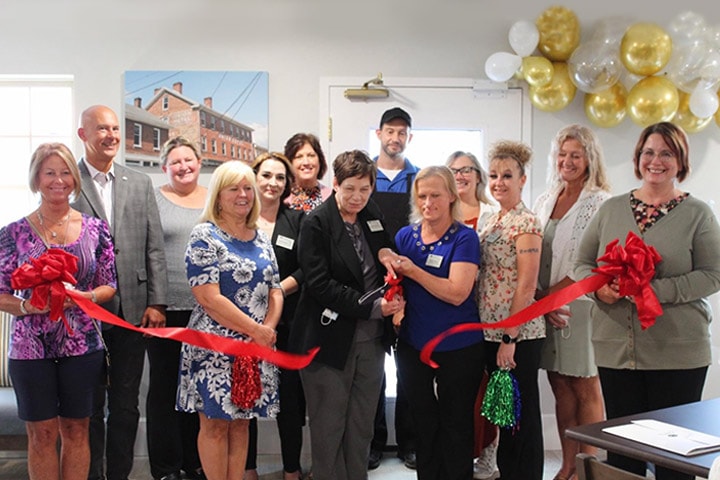 BEDFORD, Pa. – Seniors throughout Bedford County and the surrounding region will benefit from the addition of a new memory care unit at Colonial Courtyard at Bedford.

The 4,035-square-foot, 16-bed memory care unit officially opened on Sept. 19, two weeks after a ceremonial ribbon cutting was held. The senior living community at 220 Donahue Manor Road in Bedford is operated by Pittsburgh-based IntegraCare, which has 17 senior living communities in Pennsylvania, Maryland and Virginia.

Cathi Sweeney, the Executive Operations Officer (EOO) at Colonial Courtyard at Bedford, has nearly two decades of experience in senior living and 15 years assisting residents with dementia and Alzheimer’s disease.

“This is very unique for Bedford County,” Sweeney said. “Bedford County does not have a secured dementia personal care unit such as ours. It is so unique because of that fact and also because it is such a beautiful setting. It’s not what your typical facility would look like. The apartments and the rooms are absolutely gorgeous. We encourage the residents to personalize the rooms and to make the rooms their home. This is their home. We encourage them to make it their own.”

Sweeney believes seniors will benefit from the care available at Colonial Courtyard at Bedford.

“I’ve worked with those with dementia for more than 15 years,” Sweeney said. “I’ve instructed and taught people working in senior living how to care for those with dementia and the diseases of an aging population. With that and having a full-time mental health professional on board, I think we are offering Bedford County something they can get locally without having to go out of town. Plus, it is in a beautiful country setting, and we have an experienced staff.”

Winters, who joined the Colonial Courtyard at Bedford team in May, brings 16 years in healthcare and nine years in dementia care. The Memory Care Director has created a number of stations in the unit. Those stations are intended to mentally stimulate residents and make them feel at home, sparking nostalgic about the themes in those stations.

“We have a Reminiscing Station. We had an Elvis Presley theme for the opening,” Winters said. “We displayed old Elvis records and memorabilia from his most popular albums. We had different photos and a grandfather clock, which represented a moment in time.”

Another station will replicate a 1950s style grocery store.

Colonial Courtyard at Bedford Community Relations Director Bobbi Howsare said the team combined creativity and practical care. The senior living community will be home to 70 residents, including 16 in the memory care unit.

“We also have different activities to cater to different life stories, such as a veteran-themed matching game that uses the pattern of ranks from the different branches of military service,” Howsare said. “We will have crochet and needlepoint activities.

The purpose of the various stations extends beyond the entertainment, fun and nostalgic value that is evident at a quick glance.

“We have a lot of sensory activities,” EOO Sweeney said. “We try to maintain much of the seniors’ memory. We will do a lot of recall and we want to preserve the cognitive functioning they have. We try to maintain their physical functioning. We have many forms of exercise, including yoga and meditation.

“We have interaction boards. We have an activities specialist,” Sweeney continued. “We have an antique record player. We encourage them regarding current events. We also want them to reminisce. We’re also obtaining some equipment that will allow us to go back to what their neighborhood looked like in 1950 or 1960.”

Other amenities — such as five small birds in the community and a patio where barbecue dishes may be served — add to the experience.

“I think this memory care unit is a very important addition,” Winters said. “We are trying to give back as much independence as possible, both physically and in memory. Everything the residents can do, we’re going to use to help them remain as independent as possible for as long as possible.”