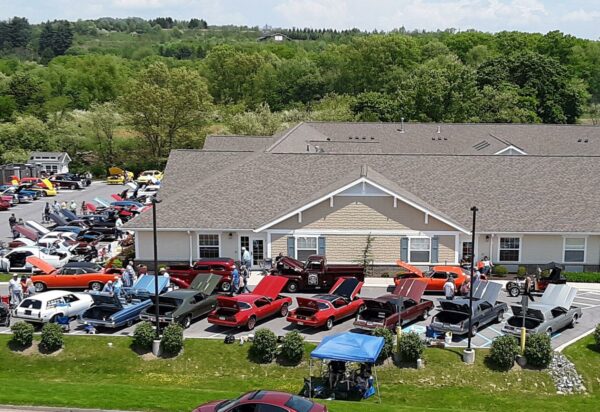 After a two-year break due to COVID-19 restrictions and precautions, muscle cars, antique vehicles, trucks and motorcycles will return for the 12th Leonard Street Car Show hosted by the Colonial Courtyard at Clearfield senior living community at 1300 Leonard St.

The event will be held on Sunday, Aug. 14, in the Colonial Courtyard at Clearfield parking lot. Registration begins at 9 a.m. Judging follows from noon to 2 p.m., with the award winners recognized at 3 p.m. Proceeds from the show benefit the Alzheimer’s Association.

Colonial Courtyard at Clearfield has helped raise a combined $10,812 during the previous eight shows from 2012 to 2019, including four straight years of at least $1,000 collected for the Alzheimer’s Association. The most recent Leonard Street Car and Bike Show in 2019 raised $2,000, an all-time high for the event.

The impact of the pandemic led to the cancelation of both the 2020 and 2021 shows.

“We like to say we have the best show on four – or two – wheels,” said Sandy English, community relations director at Colonial Courtyard at Clearfield. “We are so grateful to bring back a tradition that raises money for such an important cause. We had really begun to hit our stride as far as the growth of the car and bike show, as well as the fundraising efforts, until the pandemic resulted in a two-year break. We’re ready to get rolling again.”

“The Leonard Street Car Show has brought together so many people throughout the Clearfield area over the years,” said Roberta “Bobbi” Bradford, executive operations officer at Colonial Courtyard at Clearfield. “We felt it was important to bring back this event, which also has been a successful fundraiser for the Alzheimer’s Association.”